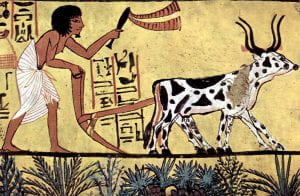 Today was a long day. I woke up to the sound of the Nile river’s water making a swooshing noise. Some people think that the Nile’s water noise is peaceful to wake up to, but I think that it’s very loud and annoying if you have heard it a lot. It was early in the morning; I decided to wake up early and see the beautiful sunrise with my friend, Ah. He is the kindest person in the nome I live in. We saw the sunrise on the rooftop of his home. Mine was about to crumble. We watched until his mother came out and scolded us for being together. Ah was about to get married to this girl, Nefertiti. The last time I saw her was yesterday when I came over to see Ah and go for a stroll. She was there, and she looked like a beautiful girl. I’m kinda jealous of Nefertiti. Once Ah’s mother was done yelling I left.

On my way home, I saw some farmers whispering. The farmers in my nome are always gossiping. I could not really hear them but they were talking about a nomarch? Or was it a king? Or maybe Egypt’s dynasty? I still have no idea what they said. I walked closer and heard the most surprising thing. King Menes was dead! I probably shouldn’t have but I gasped and yelled “King Menes is dead?!” I didn’t understand at first. It felt like my world was going to tumble like my house. I ran to Ah to tell him. We talked for hours about how we think it happened. We talked until it was dark. I headed home wondering what had happened. Maybe the dynasty will make an announcement tomorrow.

For my children’s book it wasn’t very difficult to creat the story line. Once my teacher introduced the project I knew I wanted to have animals as my characters. I knew I wanted a snake as one of the main characters and a turtle as the other, but where would this story take place? I decided on the Amazon as my setting. I chose this because I wanted small critters, colorful birds, and a green wet forest. Of course we needed a problem in the story. I knew a lot of people are afraid of snakes, because they can swallow you whole, so I thought why don’t the animals in the story also be afraid of the snake. The snake and a turtle meet and become friends, because I felt that the snake shouldn’t be a lone, but he should be happy. I hope you enjoy reading my story.

The Slithering Snake
Click to read this book, made with Book Creator
https://read.bookcreator.com